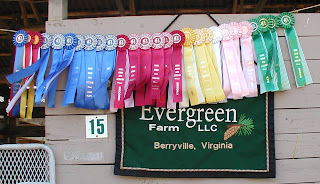 We are back from another long weekend show. We left on Thursday to head down to Culpeper, VA for the VAHA Arabian Show and Futurity. Amongst the rain showers, the rigs began to arrive. It was, as per usual, a show filled with fun, excitement and friends, both old and new. We stalled with Wendy Spangler and Fireproof Number One, aka Gem, and met up with Dona Hoffman and Future Image while there. We had another jaw dropping performance from all of our horses and our stall drapes were filled with ribbons. We brought EF Llameri, our just turned three last week filly, EF KKlassique Beauty++ and East of Eden, aka Blossom.

We spent all of Thursday afternoon unpacking and getting the horses settled into their temporary living arrangements. Friday morning arrived and so did the in hand classes. Meri was a winner in her class with me at the end of the reins and Blossom won her class as well. Friday night was the SHUS classes. This would prove to be the best showing yet for all the girls, both equine and human. We rocked! We were going in and out of class after class; it was reminiscent of my old hunter days, standing around the ring, meeting the other competitors and making friends along the way. Quite frequently after each class, we were walking out with the top spots. If we weren’t first and second we were second and third. In one class, we took a clean sweep of Blossom-1st, Meri-2nd and Gem-3rd. Beauty could not show in these classes, as she was the only purebred of the bunch. She and I stepped in and out of the purebred classes with blues as well!

Saturday morning brought the first dressage classes of the show. It was a bit daunting for me as I was riding my first First Level test off the farm. While we are building a full size dressage arena on the farm, it is nowhere near completion so I have not had the opportunity to ride it in a full size arena yet. I managed my way through and got a second in the class. The score was a very respectable 60.6%. I’ll take it. I rode Meri in Training Level Test One for Junior Horses and got a first with a 64.8%. Once again, I’ll take that! Rachel, after the past year and a half of hard work and dedication to Blossom rode a beautiful Training One test to a score of 60.0%. Saturday night brought the Sport Horse Under Saddle Championship classes.

After a brief encounter with a suspected funnel cloud, the stage was set for the Championship classes. We entered four and brought home a third, two reserves and champion. We were very proud of the accomplishments of our young riders and young horses.

More rain and then finally a bit of sun ushered in Sunday morning’s dressage classes. We all had a repeat of Saturday’s line-up. We each had two classes. Once again the ribbons came. The horses were a bit tired as were most of the horses on the grounds that weekend. The storms were huge and the rain was plentiful. Overall, we had a fabulous time. We rekindled friendships with people we haven’t seen in a while and made a whole host of new ones. Christine commented that the people at Arab shows were all so friendly and the atmosphere was so relaxed and friendly. “It wasn’t even like being at an “A” show”. Welcome to the Arabian Sport Horse Show Arena, Christine, welcome!
Posted by Evergreen Farm at 7:54 AM