The Gallery and The Painter

The Gallery
It was a very hot August day. We were invited to a gallery in a small but very upscale city. This was Main Street, USA. Cobblestone streets and beautiful storefronts. This particular gallery was an equine only gallery owned by a friend of a friend. She had contacted me the previous spring about my stallion, KKoi coming to the gallery for “Arabian” day. She mentioned that she does different breeds as often as possible and likes to get the best representations of each breed there, in the flesh, for people (non-horsey mostly) to see and touch. She explained that finding an Arabian quiet enough to spend the day in a 12x12 pen in the parking lot all day with kids, cars and all sorts of commotion around was a very daunting task, and one that she had not yet completed. Then she heard of KKoi.

Rolling over and over in my mind were all the e-mail messages that we sent back and forth and the visit to the farm by the owner of the gallery and the surprise visit afterward by the painter who had wanted to photograph him for reference material. As we were driving in the 90+-degree weather with stallion in tow, I began to wonder if I had lost my mind. Could he do it? Could he sit there all day in the heat and deal with kids, and flash pictures, and cars and motorcycles and who knows what else? We brought a tent, one of those party tents that you sit under. Well it was only 10x10 and KKoi’s enclosure was 12x12, would he deal with that too? Only time would tell.

The day started with people streaming out to see KKoi, like he was a celebrity. Well he ate it up. He acted like this was something he does all the time. He stood with kids next to him for photo op after photo op. He would, every hour, as per our contract, come out of his enclosure and walk around for people to get really close. We had one toddler get away from her mom and run and wrap herself around his hind leg. He just stood. Never moving a muscle. After it was over, after what seemed like all of the 2000 invitees came and went KKoi and I trudged home. He now had a new fan base. He now had people outside of his family adoring him. He was on his way to fame.

The Painter
During the apex of the Gallery Day I was approached by the gallery owner and asked if Lesley Harrison, the painter could come out and see KKoi. Apparently Lesley is a close friend of the gallery owner and when I sent my promotional materials ahead for use in the invitation for the gallery, the owner sent them on to Lesley. Lesley was captivated by KKoi’s kind eye and soulful look. I am a bit naïve to the art world so unknowingly I said sure. When I told my friends what was happening, most of them looked at me and said,
“The Lesley Harrison is coming here to see KKoi?” I Googled her. I learned pretty quickly that this was a big deal and I needed to seize it with open arms. Lesley came out very early to catch the morning light and KKoi at his finest. He was bathed, clipped and crimped to the nth degree. He was gorgeous, and she agreed. Over 2000 pictures later she reminded me that this was just for reference work and she had over a year’s worth of commissioned work to complete before she could even think about doing something for herself.

Night after night she said she lay awake in bed thinking about KKoi and one particular picture she took. She dreamed it in her sleep. She just could not push him from her mind. So she began to paint and in less than six months from the time she took the pictures it was completed. This stunningly beautiful portrait of KKoi’s soul. I am so lucky to have had the opportunity to meet a person like Lesley. She is an artist who, like no other I have ever seen, can take a photograph, make it into a pastel painting that looks like a photograph and include the soul of the animal she has painted. The icing on the cake is that I did not commission her to paint KKoi. She did it on her own fruition. AND she continues to do it. She is up to “Blue Halter #4”. Kkoi is in Lesley’s 2009 “Spirit of Horses” calendar, as well as a book jacket and I think there are negotiations for a wine label as well. I guess I really do have my own living art in the barn, and his name is KKoi. 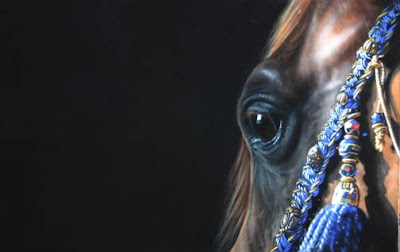