Posted by Evergreen Farm at 6:01 PM

Posted by Evergreen Farm at 3:11 PM

Last but Not Least... 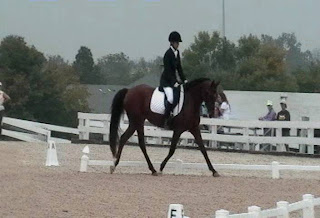 Posted by Evergreen Farm at 4:08 PM

Pictures of Mr KKoi From Nats 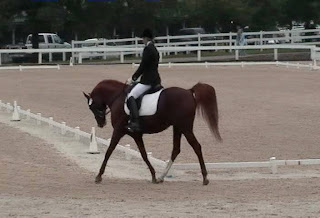 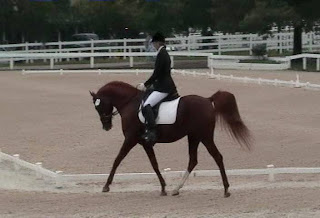 Posted by Evergreen Farm at 3:48 PM

The 2009 Sport Horse National Arabian & Half-Arabian Championship Horse Show was a show we here at Evergreen Farm, LLC will not soon forget. We brought three horses to this event at the beautiful Kentucky Horse Park in Lexington, KY. Of the horses, one is our stallion, KKoi, and the other two are his daughters; EF LLameri (Meri) and EF Epona’s Shenanigans (Nani).

Meri and Nani are sisters by KKoi and share the same dam line. Meri’s dam is Nani’s grand-dam. Tiffany, a Quarter Horse mare my parents got me for Christmas when I was 11 started this common thread. She was a fabulous mare who really didn’t live long enough. When I showed her for the first time, I wore back number 13. The number 13 will prove itself to be the number for me for many, many shows to come!

This story is based mostly around Meri. She is the superstar no one saw coming. Tiffany, the foundation dam for this line was a wonderful all around QH mare who was a true “All-Arounder”. At seven she developed cancer in her eye as well as her hip joint but we wanted this line to stay alive. In an effort to recreate this wonderful mare before she was gone for good, she was bred to a friend’s Thoroughbred racehorse. Out came a beautiful black filly we named Bucephalus (Cephie). She was named after the Alexander the Great’s horse, Bucephalus in the “Black Stallion” movie. This little mare proved to be even more spectacular than her dam Tiffany. She did everything. She rode in every discipline and did it all well. We went to college together; we moved all over the country together and she gave my children their first pony rides. After we acquired our stallion KKoi, we decided to mate our two favorite horses. This was to be Cephie’s last job as she was getting on in years. All I was expecting was a replacement for my heart. I needed another Tiffany, another Cephie; I needed a companion to carry me into my golden years. Out came a beautiful bay filly we named EF LLameri. We decided to carry the tradition of the famous horse names from history and LLameri was the name of King Arthur’s favorite mare.

In February of 2009 we decided to put Meri under saddle to see what we had. I wanted to go trail riding and maybe do some western pleasure riding and this was to be my “All Around The Farm Filly”. She was maturing quite nicely and at 3 she was mentally and physically up for the challenge. The first ride was, well, magical. It was like she was born broke. She was easy and so incredibly willing. A local youth was interested in learning how to start a youngster so she decided to come over and give her a spin. Under careful instruction, Meri was really blossoming as a dressage horse. We decided to put them on the road together. We would, just for giggles mind you, show in some “A” shows. By the time we hit East Coast Champs she was on a roll and earned two Regional Top Fives and a Reserve Championship. We decided to haul her to Nationals just to see.

Meri was entered into 3 classes. AA/HA SHIH ATH where she was one of the youngest competitors. She held her own and ended up mid pack. She went into HA/AA Training Level Junior Horse where she was the YOUNGEST horse to compete. She fell just out of the ribbons in 13th place. Wow, 7 months under saddle and not only was she at Sport Horse Nationals but she was competently competing for the silks. Then we were in the HA/AA Sport Horse Under Saddle Junior Horse semi-finals. It was in the Indoor Coliseum. It was a very scary place, for both her and me but we went in and did our best. Meri did all that was asked of her and more. We lined up and anxiously awaited the call for the 8 of the 16 who were to move on. When our number was called I had to look at her bridle number because I was sure I was hearing things. We made it!! We made it through to the finals! We, my little three-year-old all around the farm filly and I, made it to the finals of The 2009 Arabian and Half Arabian Sport Horse Nationals! I really had a moment. I was crying so hard I couldn’t see to make my victory pass. It was like soaring through time and space back to being an 11-year-old little girl riding my very first horse ever, my Tiffany. I could have gone home at that moment. I am not the type of person who has to win the ribbon to win the class. Just making the cut was truly enough for me.

A quick check of the judges cards and we were astounded at what we found. She was ranked second in her semi final class. Second! Wow, she is three. She was the ONLY three year old in either of her under saddle classes thus far.

On to the finals we go. Meri was a bit apprehensive in the covered arena. She had been in there to school, but of course, there were not any people in the stands. Now the stands were very full. She was nervous. I chose to put her in the ring second so she could get around a few times before all the horses were in, the gate closed, and judging was underway. It was if she knew what was coming. As soon as they announced the gate had closed she put on her game face, lowered herself to the bit and went on. She had a beautiful round. She sparkled more in the finals then she had in the semis. The ride felt so beautiful, so cadenced, and so rhythmic. We did not make the top ten, but we made it on one of the judge’s cards. We ended up in 13th place. That’s right 13th. That would be the number I first put on all those years ago when I climbed upon her grand dam 30 years ago.

While we have complaints about the show and the grounds and like many of the competitors, we were disappointed with the condition of the barns we were in; I have to say we still left with a smile. No long, maroon ribbon, no neck roses, but a smile indeed. I think that is what so many competitors are missing. The smile. The genuine sense of accomplishment. The fulfillment from within. It should not always be about the ribbon. Was I disappointed about not getting a Top Ten? To a point. Do I wish I had gotten one so I could say she got it when she was three? Of course. However, am I completely fulfilled because of my/our accomplishment? Absolutely. I bred this mare. I bred this mare’s dam. Essentially, I am a beginner to the world of Arabians and certainly to dressage. I am a hunter/jumper by trade in the open world of TB’s and QH’s and took a shine to Arabians long ago after watching “The Black Stallion” movie. Nevertheless, look how much I have accomplished in such a short period with my homebred, home trained and home shown horses. I am on top of the world! Now will I have to go back in 2011 to claim the big prize, a neck full of roses! Of course just to see if it feels any different!
Posted by Evergreen Farm at 12:43 PM 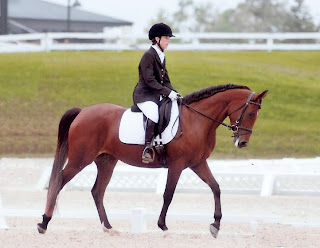 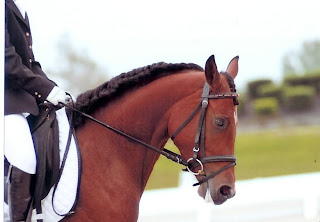 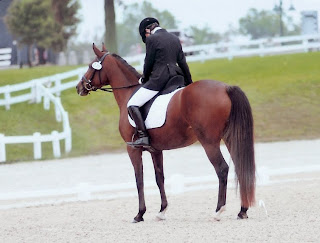 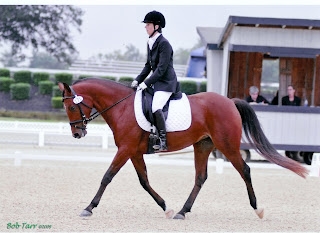 Posted by Evergreen Farm at 7:48 AM